TOKYO, Japan, September 14, 1999 ----- Pioneer Corporation announced its introduction of the industry's first Mini-System (one body type) with a Built-in CD-R Recorder, to the Japanese domestic market. 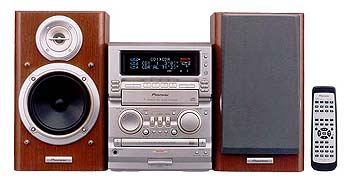 The X-RM7 is the industry's first mini-system with a built-in CD-R Recorder. Also having a built-in 3-CD Changer, the user will be able to record tracks from a CD to a CD-R or CD-RW blank disc. By programming the CD changer, the user can edit tracks and make his or her own original CD.

The system also has a "Direct Recording & Programming" Function for a convenient CD to CD recording. With a simple press of the "Direct REC Button", the user can choose from one of the following three recording modes that meets his or her needs.

Also, with the "Program Recording" Function, the user can program the CD changer and record whatever track in whatever order he or she likes, from the CDs set in the CD Changer.

3 ) A Variety of Input and Output Terminals

The X-MR7 has 3 input and 2 output terminals for easy connection to external sources. By connecting a portable Mini-Disc (MD) Recorder, not only CD to MD recording, but also MD to CD recording can be done. Furthermore, an analog record player can be connected, as the X-MR7 has a 'phono' input terminal (with phono equalizer). So users can easily record their precious analog records on CD-R discs, and keep the same sound quality as the original.

The X-MR7 is equipped with Pioneer's State-of-the-Art Wide-Range Technology to assure a high-quality sound of prerecorded CDs, and of course your original CD discs.
The "Legato-Link Conversion" processor will expand the16-bit/20kHz frequency data, up to 40kHz, to high fidelity of the natural sound.
Also, a light and hard "PPTA Foam" applied in the wide-range 2.5 semi-dome type tweeter speaker, will reproduce a natural sound having an unconstrained high tone.

The X-RM7 is designed for consumer use only. CD recording will only be practical by use of CD-R and CD-RW blank discs having the descriptions of "FOR MUSIC ONLY" or "FOR CONSUMER USE".

Search by year and month