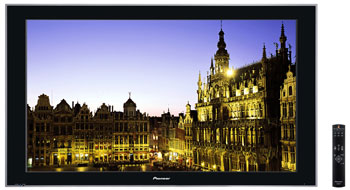 The smaller the screen size, the more difficult it was to create a 1080p plasma display panel. To overcome this big challenge, Pioneer has developed a "Crystal Emissive Layer", which can drastically boost the luminance efficiency and discharge speed of a PureVision plasma panel. When combined with the "Direct Color Filter," "Flex Clear Drive" and other technologies that Pioneer has accumulated over many years, this technology has resulted in this world-first breakthrough for 1080p 50-inch PureVision plasma monitor.

The current rapid spread of digital broadcasting and optical communication services allows customers to easily receive high-quality video material. As this kind of infrastructure continues to grow, the customers' demand to enjoy high picture-quality content on a large screen is now increasing. Also, content utilizing the most advanced high-definition signal format of 1080p will soon be available on a Blu-ray Disc, heralding a new age of advanced picture quality for the home.

To quickly respond to such customer demands, Pioneer will launch the Pioneer PureVision PDP-5000EX in early June, 2006 in Japan at the suggested retail price of 1,050,000 yen (including tax).

Pioneer's innovative "Crystal Emissive Layer" technology, which has been inherited from the sixth generation panel, is indispensable for the realization of the world's first 1080p plasma display in the 50-inch screen size. In addition to reproduction of blacker blacks and details of dark areas often found in movie scenes are well reproduced, this technology has contributed to the new 1080p plasma panel at the following points:

Pioneer's proprietary Direct Color Filter technology, which eliminates a glass for the front filter and is directly affixed the plasma panel, has also been optimized and employed in its 1080p plasma monitor. Achieving a wider color range of 107% compared with the NTSC standard - the highest level in the industry*3, the new plasma panel realize smooth color reproducibility coupled with rich color gradation expression, irrespectively of viewing angles. In addition, this technology not only decreases the panel's weight but also reduces the deterioration of focus quality caused by multiple reflections previously generated between the front filter glass and plasma panel. Moreover, as reducing the ambient light reflection rate and enhancing color reproducibility, the Direct Color Filter technology allow viewers to enjoy a fresh, sharper, crisper and more vivid video image even in a bright living environments.

5) A wealth of input signal formats and digital interfaces supported

The PDP-5000EX is equipped with two HDMI*4 terminals and a DVI port, which are digital inputs necessary for high-end monitors, to support diversified high-definition digital video contents and digital output devices. The HDMI terminals supports signals of 1080p (60/50/24 Hz) video format*5 of the highest quality in the HDMI standards. In addition, they enable full-time 10-bit processing*6 throughout, from signal input to video display, to realize even greater high-definition video images.

The number of pixels for the PDP-5000EX is about double, and the pixel size is about half (about 47%) compared with that for the PDP-506HD launched in September, 2005,